Friday 24th of May marked the beginning of new venture in my cycling… CYCLOCROSS!!!


With so much hype about the format and with it only really taking off in Australia over the last couple of years, I was super keen to get my euro on and attempt to compete in the 2013 National CX season.


And no one better to start my campaign with than the Kings of the Australian Cyclocross scene - The Dirty Deeds crew at the 4th annual DDCX Series Prologue.


Run by the Brunswick Cycling Clubs coolest kids on the block, DDCX has grown from massive to outrageously humongous!!!


Making a day of it and making the most of Melbourne’s limited sunny skies, I along with dad travelled down to Melbourne unsure yet very excited the evening’s reputation.

First stop was at Giant Bicycles Australia’s brand new Giant Cycling World store in Hampton to catch up with Dave Ross and his excellent team. I must say if you have not been into the store it is an absolute must when you are in the bay side area of Melbourne next.
From the as soon as you see the massive wooden front door you know that this store is something special! Inside it’s all about the modern age yet retro lifestyle that Melbourne is so world famously renowned for.

With some time to spare we headed down to Harrison street velodrome to help the ddcx crew set up for what was going to be a Belgium beer and Aussie BBQ  frenzied public party! 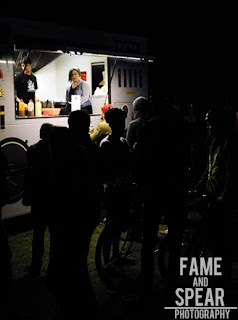 By race start at 7pm Harrison street was the place to be! Approximately 120 deadly serious Cyclocross racers in Elite men and 50 odd equally if not more serious women not to mention another 50 odd guys in the open class and about the same numbers in the Junior’s creating the best free to public entertainment of which there were thousands euro inspired supporters!


Being in race 3 of 4 heats meant that I could build those nerves up just that little bit more whilst watching the earlier races.. Not to mention that I was in the same race as the little rocket ‘Liam Jefferies’.


On the start line it was all serious as everyone was planning their attack to gain the best possible position coming into the first 360 deg hair pin.


Luckily Liam and I were able to get a quick xc like start and had a clear entry into the first corner! 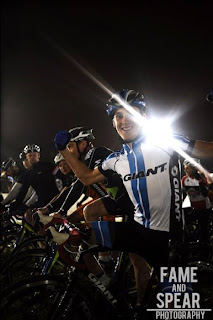 Flying through the tight course we started pulling away from the rest of the field until I came unstuck ‘on one of those sniper like grass strands…’ haha, getting tangled up with the riders following, I dropped down to around tenth place.
CALLING on all MTB and junior track cycling skills I was able to bring back about half the distance I lost to Liam and crossed the line in 3rd place absolutely spent….. 2 lap race!! That’s Cyclocross!!!!


It was hard to fight the pressures to fill up on Belgium beer and sausages but I fronted up to the start of the handicap determined to have a clean run and attempt to get one back on the little rocket in orange! 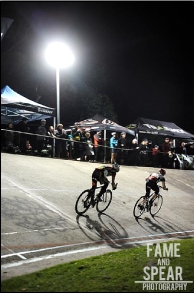 And the situation of the previous race reversed!!! Liam unfortunately succumbed to a close look at the ground whilst we fought our ways through the 30 man strong field. In the end I was able to pass 26 riders coming home with 4th place in the 2 lap race.


The night was filled with exciting racing in all categories and was heightened by the exhilarating atmosphere created by the crowd (belgies could take a leaf out the Aussies booklet on Cyclocross celebrations that’s for sure).
This is the only race I have done where riders have been sprayed with quality European beer, squirted at with super soakers in the hands on juniors, targeted by sideliners throwing beer soaked bread and dare I say it BBQ sauce!


All in all a fantastic evening! Certainly one that is only going to get bigger and crazier.


If you have not witnessed the evenings shenanigans before I recommend you circle the date for 2014 as soon as it’s released!!


Special thanks goes out to Brunswick Cycling Clubs DDCX crew for an amazing event and continuous plugs over the PA, Fame & Spear Photography for some great shots https://www.facebook.com/pages/Fame-Spear-Photography/256975601003228, Giant Bicycles Aus the TCX was awesome, Essendon Cyclery for the hospitality in offering cover, sausages and laughs and Dave and his team at Giant cycling World Hampton.


Next up is Wangaratta’s 2 day road tour next weekend, Skinny slick’s here I come Yiiieeewww 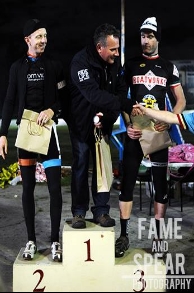 Greg getting a sneaky top step podium in CX heat 1
Posted by Unknown at 00:00 No comments: