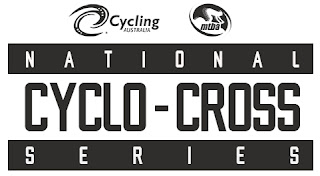 CYCLOCROSS- WHAT AN AWESOME SPORT!!!
How was I not engaged in this radical form of cycling earlier?


With some last minute planning I was off to rAdelaide to compete in my first UCI sanctioned Cyclocross race and although I was practically buzzing with excitement I was perhaps a little nervous as the longest Cyclocross event I had done to date was the Dirty Deeds prologue and whilst it was out of this planet crazy, it was only about a five minute race….. I was now about to face up to two sixty minute races with athlete’s coming from all over Oz to create fields that had some of Australia’s most highly regarded cycling athlete’s and whom were all racing for top honours.

After a 4.00am wake up and a 10hr drive we finally arrived in Adelaide mid Friday afternoon. Getting into the rAdelaide spirit we headed down to Adelaide Central Market and found ourselves at ‘Ky Chow’ having some quality Chinese for dinner. 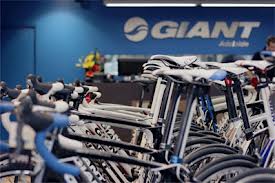 With Saturday’s race starting at 2pm I was able to quickly drop into Giant Cycling World Adelaide for some fine tuning of the TCX before hitting the event venue to help set up the Team Giant camp!


Starting 45th on the grid gave me a situation that I was used to dealing with whilst competing in Europe on the mountain bike – Elbows out, don’t leave gaps, look for gaps to move forward and if there aren’t any gaps make them!


As is the same with World Cup mtb racing you can normally move forwards but the leading riders have generally established a gap on the rest of the field by the time you’ve moved through the peloton.
One big thing I learnt about Cyclocross very quickly was that due to the high speeds bridging 5 metres to the rider in front is extremely difficult! I was fortunate enough to gain a decent start and moved up a number of positions early on in the race. 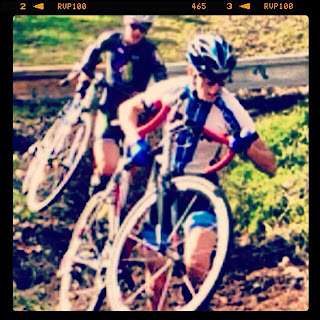 I settled into a small bunch that included fellow national series mtbers Nick Both and Tom Goddard (4shaw-Giant). Nick was able to establish one of those gaps that we were never able to recover and in attempt unfortunately Tom had a closer look at what type of grass Adelaide parklands has.


With 3 laps to go we lost cx dynamo Neil Ross and our bunch became that of Warrack Leach and myself.


Eventually after an hour of heart and lung breaking pain, it came down to a sprint for 18th. Not knowing how well Warrack could sprint I decided to take to the front and defend position rather than attack- all great in theory but unfortunately I didn’t have the required strength to hold him off. 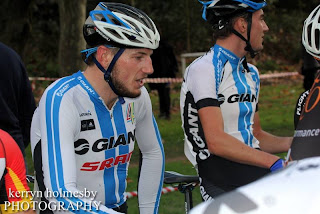 Finishing exhausted and drained of absolutely everything, I was rather pleased to have finished where I had. Most of the time I would say “really looking forward to tomorrow” but in the case of Saturday afternoon it was a case of “That was one of the best races I have ever done, But do we really have to do another tomorrow?” I’m almost certain by the faces I saw post-race this was the general vibe. Gradually once the body had started to recover from the punishment the excitement for Sunday began grow and grow.


Saturday night was far from a great night’s sleep. Not because I couldn’t sleep, more the case of my minds excitement from the days race and how I could make Sunday’s round 2 race even better!


Again starting at 2pm meant that the morning allowed for a casual walk through Rundle mall. 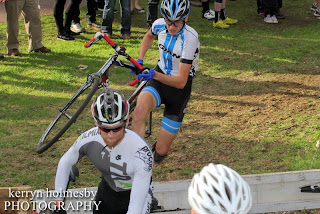 Changing parkland for round 2 had us on a course that was deemed to be more suited to mountain bikers! “Yeh, Yeh, Yeh, this is my second cx race! I’l be happy to keep rubber side down”


And keeping rubber side down was achieved thanks to Schwalbe tyres Aus – Repping the skinny Racing Ralphs meant my tyres were gripping to the grass like a baby to a milk bottle. 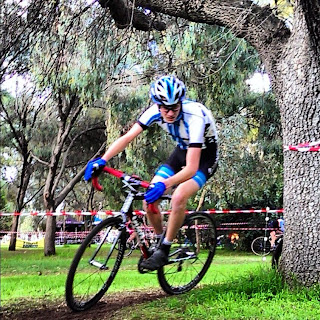 Starting further up the grid didn’t seem to help too much as a poor start had me in practically the same starting situation I had in round one! Moving through the field I was able to get back to about 12th or so place and onto the wheel of multiple Tour De France green jersey winner ‘Robbie McEwen’!!! 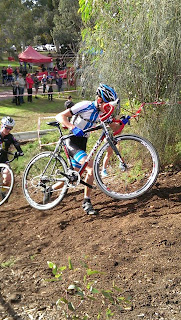 And again I had the pleasures of riding with Nick Both and Warrack Leach. To say racing cx is an awesome experience is blown into the universe when you are there swapping turns with a guy I watched on television whilst growing up winning some of the world’s biggest events!
However it certainly didn’t make the racing any easier.


With the four of us staying together practically until the end we cemented the possibility of a top 10 place for one of the riders in our group. Robbie being so tactically minded was able to get a small jump on the rest of us mid-way through the last lap (although fair bet would say he’d win the sprint anyway). With Warrack dropping off it came down to a one on one match sprint against Nick. This time around the situation was a little different as Nick was leading out and I actually had some legs to work with!! I was able to jump around with a couple of hundred metres to go and finish in 11th place 2 seconds behind Robbie.

Too tired to drive home following the race we opted to stay an extra night in rAdelaide and headed down to Glenelg for what I’m calling a well-deserved ice cream! 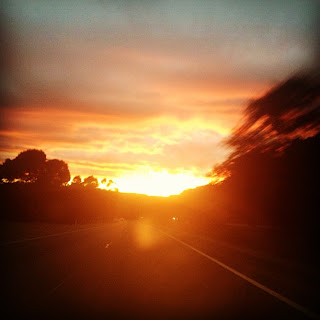 Huge thanks must go out to Giant Cycling World Adelaide for their fantastic support in the lead up and over the duration of the weekend’s events.
Schwalbe Tyres for the rubber that works
Gu Energy for pre event hydration and recovery (no liquid on board during race)
The organisers and volunteers that made the event possible along with the crowds that lined the sidelines!
Kerryn Holmesby Photography for more photos check out Kerryn's FB page @ https://www.facebook.com/kholmesbyphotography
And of course GIANT BICYCLES AUSTRALIA!!!
Special thanks to my dad (Greg) for all the tremendous the support he gives and offers!
Posted by Unknown at 18:27